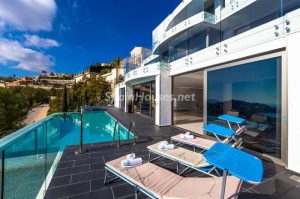 “We have carried out a survey of the sector and it appears that house purchases by Brits on the Costa del Sol and the Costa Blanca have fallen by around 50% since the referendum,” said Mark Stucklin, of the Second-Home and Resort Industry Observatory.

“At first it was the uncertainty after the Brexit vote, and then the fall in the pound,” said Catriona Hogan, marketing director at yourVIVA, a holiday homes estate agent on the Costa del Sol.

“About 40% of our clients are British and we’ve seen that drop to around 30%. There’s still a lot of interest but there’s a wait-and-see attitude as people are watching to see what happens with the pound. Things are picking up a little now.”

Stucklin pointed out that the market had always closely mirrored the fluctuation in the pound-to-euro exchange rate. The pound is currently down 18% compared with the end of 2015.

“If the trend continues it will have a significant impact on the Costa Brava and Costa Blanca markets, among others.

“While demand from other countries such as Germany, Belgium, Sweden and France is growing, in the short term it’s not enough to make up for the lost British buyers.”