Finally, it seems that, although there is no official announcement, Las Vegas Sand Corporation has chosen Madrid to built Euro Vegas. Nevertheless, Catalonia is going to have its own amusement resort, called 'Barcelona World'. This enormous construction will combined six amusement parks and will be situated next to Port Aventura resort. 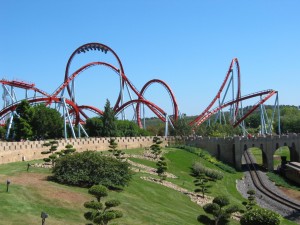 Spanish billionaire Enrique Banuelos and his Veremonte firm said they will construct the so-called “Barcelona World” on 1.5 million square meters of land belonging to La Caixa in Tarragona province. The 4.5-billion-euro investment is expected to create 20,000 direct jobs.

The project will be self-financed by investors from the six global areas who want to set up businesses in their respective theme parks, explained Lluís Rollán, of Mediterranean Beach and Golf, a Veremonte affiliate.

“We are not worried about EuroVegas. In fact others should be worried about what we are planning,” said Catalan land commissioner Lluís Recoder, who suggested that Barcelona World will be completed before the EuroVegas project gets off the ground in Madrid.

“Competition is competition and we want to be the first,” said economic commissioner Andreu Mas-Colell.

Adelson has told Catalan officials that the initial investment for EuroVegas would be around 17 billion euros but he also tossed around a 27-billion-euro figure in Madrid. The offer was to build the mega casino-hotel complex on 800 square meters of land near Baix Llogregat, with 250,000 direct and indirect jobs up until 2025.

1 thought on “‘Barcelona World’: The answer to Eurovegas”