Spanish house prices fell by the most in the third quarter of this year since a massive property bubble burst around the start of 2008, according to figures released Friday by the National Statistics Institute (INE). 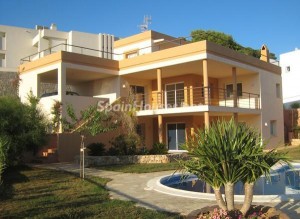 The INE said prices declined 15.2 percent in the period July-September from a year earlier after declining 14.4 percent in the previous three months. Prices have now fallen for the past 18 quarters, with the pace of the falls accelerating over the past year. Prices in the third quarter of last year were down 7.4 percent, eased 11.2 percent the following quarter and dropped 12.6 percent in the first quarter of this year.

The average price of existing homes declined an annual 16.4 percent, while the price of new homes dropped 13.6 percent. Prices fell in all of the Spanish regions, with the biggest fall experienced by Madrid where they declined 17.9 percent, followed by Asturias where they dropped 17.5 percent.

Home sales have picked up in the past few months in anticipation of an increase in the value-added tax rate on new housing to 10 percent from four percent at the start of next year, when the government will also remove tax breaks for mortgage payments on the main home.

However, demand for housing remains conditioned by an unemployment rate of over 25 percent and by tight credit.