La Zagaleta in Benahavís (Málaga),  considered the most exclusive residential estate in Europe, plans to export its formula to other countries. The development firm that owns the private estate has recently appointed a new president, German Oswald Grübel, the former CEO of two of the most important Swiss banks, UBS and Crédit Suisse. He has taken over from La Zagaleta’s founder, Enrique Pérez Flores, who, at the age of 90, will become honorary president. 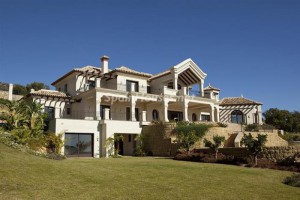 Grübel lives on the estate and was already a board member. This latest appointment completes the renovation process that began at the end of last year when Jacobo Cestino was named director general.

The new La Zagaleta project aims not only to establish the estate’s position as the most exclusive place to live on the continent, but also to branch out internationally.
The possibility of investing in projects in Greece, Turkey and Germany is being studied said sources from the firm, who stressed that their financial situation, with profits and no debts, puts them in an optimum position to grow.

While the rest of the real estate sector has been practically flattened by the crisis, the top end of the market where La Zagaleta moves, attracting wealthy and mainly foreign clients, has escaped the turbulence.

Its shares on the Swiss stock exchange have not been affected by the Spanish crisis.

Not only is La Zagaleta considered one of the most exclusive places to live in Europe, it is also among the safest. Its properties are either the permanent or holiday homes of business leaders from all over the world. Around 30 per cent of property owners are British and the same proportion are German. The rest are Swiss, Danes, Spaniards and Arabs.

For its international expansion La Zagaleta’s strategy is to form an alliance with an international group that works within the luxury sector and not to move from within the margins of exclusivity that have become its hallmark.

La Zagaleta covers 900 hectares of land with its own road infrastructure that can be accessed at two points along the Ronda road. The no more than 230 properties are worth between four and 30 million euros. The estate also boasts two golf courses, a riding club with 23 stables, tennis courts and a heliport.

Despite wanting to keep its current low profile the company that owns La Zagaleta will continue to organise the Brand and Trend Forum. The first two editions of this event in Marbella were attended by executives from leading firms.