The World Tourism Organization says that last year, 83 million Chinese took their vacations abroad, an eight-fold increase on 2000. The Chinese overtook the Russians as the main consumers of tax-free goods in Europe, and in 2012, overtook the Germans on the amount they spend on travel. Last year they spent 78.4 billion euros, a 40-percent increase on 2011. 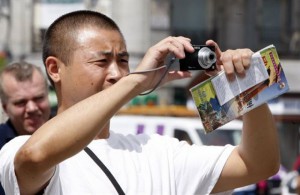 Spain has set itself the challenge of trying to attract more Chinese visitors, setting the target of one million by 2020. This year's January-July period saw 112,000 Chinese visit Spain, a 30-percent increase on 2012. In general, Spain, like the rest of Europe, is moving away from organized mass tourism: France comes 11th out of the top 25 destinations for Chinese vacationers. Spain is not on the list.

Rowdy or not, governments around the world are doing all they can to attract Chinese visitors, seeing them as a simple way to improve their ailing economies. But tempting the Chinese is no easy task, says Chanarong Mookjai of the Thai Association of Travel Agencies. "The absolutely essential thing is having enough people who can speak Chinese around so that visitors feel comfortable, and that also means that we have to adapt to their needs. For example, it is unthinkable these days for any decent hotel not to have at least one person on duty at all times who is fluent in Mandarin." According to the Spanish Consulate in Shanghai, the lack of Mandarin speakers in Spain is preventing the country from luring more visitors from China.