Banco Santander’s net profit in the first nine months of the year plunged 66 percent from the same period a year earlier to 1.804 billion euros, as Spain’s leading bank stepped up provisions for its exposure to the ailing domestic real estate sector. 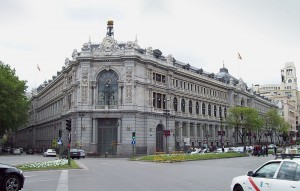 Santander said Thursday that in compliance with government decrees issued in February and May of this year it had charged a net 3.476 billion euros against earnings for potential losses from real estate assets, 90 percent of the requirements dictated by the decrees.

The bank said it had reduced its exposure to the real estate sector from 42.5 billion euros at the end of 2008 to 26.5 billion as of the end of September.

Spain has been granted a loan of up to 100 billion euros to clean up the balance sheets of its banks because of their exposure to the property sector, which went into a tailspin around the start of 2008 after a giddy decade-long boom. The government is setting up a bad bank to absorb up to 90 billion euros in toxic assets from the country’s banks, mainly related to the real estate sector.
END_OF_DOCUMENT_TOKEN_TO_BE_REPLACED