Exit Architects have brought light into a 19th century prison by replacing the roof with a zink steel cover full of skylights. 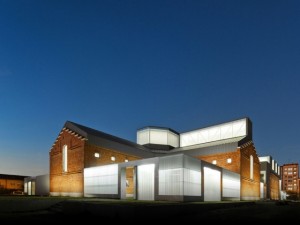 Situated in Palencia, Castilla y León,  a city in northern Spain, the historic Neo-Mudéjar brick building has been transformed into a civic centre. The new dynamic hub combines both ancient and modern walls. Exterior walls of the four existing structures were retained and extended with five pavilions. The entire unit is crowned with stepped roof units to guarantee light-infused interior spaces.
END_OF_DOCUMENT_TOKEN_TO_BE_REPLACED 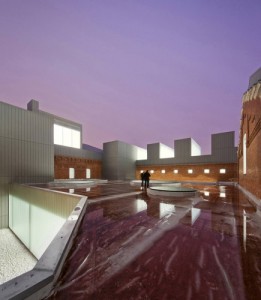 Remodelling this "neomudéjar" style prison must have been a tough enterprise. Its grey walls and shadowy passageways have turned in a widely open building. "The former Palencia Provincial Prison complex was created at the end of the XIX century", writes Victoria King for Arch Daily, "built with brick bearing walls following the “neomudéjar” style, and composed mainly of four two-storey wings and some other with one storey. On this building was planned a comprehensive refurbishment to transform the former use and convert it into a center that promotes the social and cultural activity in this part of the town".

As architects  Ángel Sevillano and José Mª Tabuyo, from Exit Architects, say: "Our proposal intends to convert the former prison into a meeting place, recovering some of the old spaces, and creating at the same time new structures that make possible the new planned activities. It is a project that respects the existing building, which is given a contemporary, lighter appearance, and where the natural light will play a key role".