Spain remains being a preferential spot for the Brits According to the tourism council in Valencia, the British tourism market is increasing in comparison to last year, around 13%, in Costa Blanca, which will help pull the region out of the enormous crisis we are living. 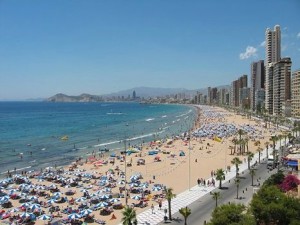 British tourism rose 9.1 percent in 2011 in spite of the pessimist economic situation. Consequently, this year’s data improve the confidence to the global financial recovery. The tourism observatory of the Valencia region has informed that this year there will be about 2.5 million tourists from the British Islands, most of them in the province of Alicante. "International investment into Spanish property increased last year by 27.8 percent through to the end of September," Marc Pritchard, Sales and Marketing Manager of Spain's leading house builder Taylor Wimpey España. "Here at Taylor Wimpey España we have seen a 10 percent increase in enquiries from potential buyers already this year which is positive news. Of course, while there has been an overall 63 percent increase in the number of Taylor Wimpey España properties sold to foreign buyers this year already, British buyers remain our biggest fans with a staggering 100 percent increase in sales to this group to date this year compared to the same time in 2011." Source: worldpropertychannel.com