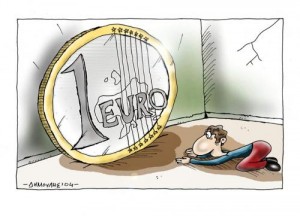 The government had guaranteed not to give money to the banking industry which is struggling in the wake of a collapsing ten years of housing boom.

"If it was necessary to reactivate credit, to save the Spanish financial system, I wouldn't rule out injecting public funds, like all European countries have done," Mr. Rajoy said in interview with Onda Cero radio stations.

On the other hand, an official at Spain's finance ministry said measures that are expected to be approved by the cabinet on Friday will include guidelines to remove impaired real-estate assets from banks' balance sheets.

The segregation of toxic assets is seen as key to completing the clean up and calming investors.

The Spanish finance ministry official explained that the government and central bank are studying a specific cleanup plan for Bankia SA and Banco Financiero y de Ahorros SA, which could include a total change of their management. Newspaper El País said Monday the government also plans an injection of state funds via convertible bonds with a rate of about 8 per cent.