Argentinean architect Emilio Ambasz has decided to locate his Museum of Art, Architecture, Design and Urbanism in Madrid on the Paseo del Prado, close to the CaixaForum, the Prado, the Thyssen, and the Reina Sofía museums. The project, which will turn an abandoned lot into a 3,672-square-meter, five-floor building covered with plants that act as natural thermal control mechanisms, and with a foliage-covered roof that will collect rainwater, exemplifies Ambasz's concept of introducing greenery into the heart of the gray city. With a budget of 10 million euros, the Emilio Ambasz Foundation will take care of the design and construction as well as the running of the museum, which will include a program of grants for young architects. 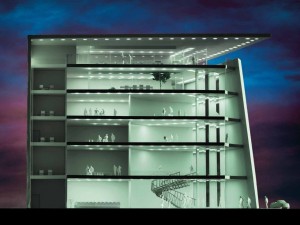 "I know it sounds presumptuous, but I lay claim to being the precursor of current architectural production concerned with environmental problems," says Ambasz.

From the beginning, Ambasz says he was obsessed with reconciling nature and artifice. His first built project, the Lucile Halsell Conservatory, in San Antonio, Texas, completed in 1988, is a collection of chimerical glass cones planted into earth berms like diamonds, invoking some vision of Arcadia, either ancient or futuristic, or maybe both.

Many of Ambasz's projects focus on features such as the presence of light, the murmur of water, the manipulation of perspective and the inhabitation of space. "I have always striven in my work to present alternative models of the future so that we can change the present," Ambasz once said. "If there is any strength to my architectural ideas, it comes from the fact that I believe that architecture has to be not only pragmatic but also move the heart."

Madrid Mayor Ana Botella thanked Ambasz, describing him as: "An Argentinean Spaniard, who made his name in the United States, and is today internationally known. We had to compete with New York, London, Paris, Florence, Bologna, and even Buenos Aires, but he chose Madrid."