The European Court of Justice have ruled that Spain’s mortgage law is incompatible with a European directive on abusive practices in consumer contracts, opening the door to more legal protection for households facing eviction from their family home. 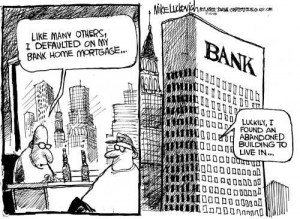 The ruling comes in response to a question posed by a Barcelona court in connection with the eviction of Moroccan immigrant Mohammed Aziz from his home in January 2011, after he failed to meet mortgage payments on a 138,000-euro loan granted to him by savings bank CatalunyaCaixa in July 2007.

The ruling will apply to all eviction cases now being processed across Europe but might not be applied retroactively, as pressure groups have been calling for. Amendments to the mortgage law, which is more than a century old, are now going through parliament, and it appeared as if the government was waiting for the Luxembourg-based court’s judgment before proceeding with the passage of the draft law.

The court’s decision will effectively allow judges to stop eviction procedures until a ruling is given on claims of abusive clauses in mortgage contracts.

There have been some 400,000 mortgage foreclosures in Spain since 2008, of which about half ended up in evictions.

There have been a number of recent suicides among people who were facing being thrown out of their homes for falling behind on mortgage payments.

The European Commission said it was happy with the judgment because it upheld the right to protection for European consumers. Brussels said it would get in touch with the Spanish authorities on how to bring Spain’s legislation in line with European laws.

One of the anomalies of the current law in Spain is that if a homeowner fails to meet a single monthly mortgage payment, the bank can initiate accelerated proceedings to evict the borrower and take possession of the property. Even if the borrower alleges the contract he has signed is abusive and a court agrees with him, if the eviction has already been carried out the homeowner has the right to compensation but not the right to recover the property. The bank can also ask for full repayment of the loan even after obtaining possession of the property in question.

Congress has also agreed to take on board a popular legislative initiative in Congress organized by the Mortgage Victims Platform (PAH). The PAH gathered 1.5 million signatures supporting the initiative, which calls for a backdated halt to evictions.