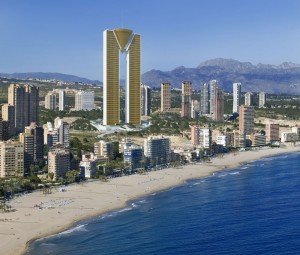 The inauguration was initially scheduled for mid-2009, then pushed back to the summer of 2011. For months, it was evident that no progress was being made at all on the site. But the project's real situation did not emerge until last week, and it is a complex one: although the loan belongs to Sareb, the contract shows that building itself is the property of Olga Urbana, and only a realtor called Maxxima may sell it.

In fact, the unfinished story of this urban behemoth of 47 floors and 269 housing units is one long compilation of atypical situations. Sources familiar with the project said that the first sign of trouble came in 2009 when the builder went bankrupt. The crisis was roaring by then, and the savings bank stopped construction work and conducted a viability study. The lender then hired a Madrid firm, Suasor, to handle the project's expenses. Any money saved would be a commission for Suasor.

Workers from the defunct construction firm created a new one, Kono, and drafted a proposal for the building's completion. Suasor seemed initially quite keen, but ultimately gave the project to another Madrid firm, Eyte. Eyte's proposal shows an uncanny resemblance to the one present by Kono. The only difference is that the Madrid study contained serious mistakes. In one instance, it miscalculated the position of the steel structure by seven floors, and in another flaw, it offered outdated prices for the 2,500 tons of steel required. Olga Urbana made the final decision: the former building workers would get the project back. But the relationship between Kono and Suasor from then on was anything but smooth.

And so in 2010, work resumed in fits and starts. After the first month, Caixa Galicia put payments on hold because it wanted all workers to open up an account and deposit their monthly wages with the lender. But the builder refused. Later, workers went four months without pay. It is also worth mentioning that until the first 23 floors were built, it did not occur to managers to set up a freight elevator for the 41 workers who kept having to trek up and down the stairs.

But there's more. In April 2011, when the concrete already reached the 46th floor, the floor plans for the 47th story were not ready yet. In July, the freight elevator collapsed with 13 workers inside and the ambulances were unable to access the site because no vehicle entrance had been built in order to save money. Several workers were seriously injured.

In January 2012, there was a new surprise: the elevator shaft had not been taken into account, as the promotional designs clearly show. "The space was calculated for a 20-storey building," said the same sources. Then, in May, the architects directing the project resigned. They have declined to comment on the case.

InTempo is about 94 percent complete, with 35 percent of the apartments sold. The new completion date is December 2013, but the project is being held back by fraud complaints, embargoes and other claims by clients and providers. Unfazed, developers have not brought down prices: a one-bedroom apartment has a price tag of 358,000 euros, with increments every 10 floors.

The building meant to symbolize an era is just that - a symbol for an era of excess.