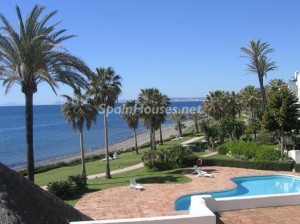 A total of 3,577 homes had been due to be built on this land, while another 193 hectares were the location for development projects (involving 3,893 homes) that will be partially affected. The land in question is in areas that do not have an approved ‘partial’ development plan that allows the construction. Projects on land that do have partial plans will be able to go ahead.

The affected projects projects in the province of Malaga are located in Vélez, Estepona, Mijas, Manilva, Casares and Torrox. These areas of land are to be given grade 2 protection as they are considered to be of considerable environmental value, support the green link between coast and inland or improve the quality of the environment in otherwise highly developed areas.

The decree prohibits the construction of residential properties, industrial buildings or any other structure. Exceptions include buildings necessary for agricultural activity, leisure and open air sports facilities, camp sites, restaurants and hotels although no building must have no more than two floors (ground plus one) and they must fit in with the surroundings.

One clear example of how the new regional law will not have the foreseen impact is seen in Estepona. There the town hall had predicted that 16,751 planned properties would not be able to be built. However in the end only three sectors where there were plans for 1,052 homes have been affected.

Estepona town hall still plans to object to the decree claiming that it is encroaching on municipal jurisdiction, however the local authority can really breathe a sigh of relief.

Among the projects that will be allowed to go ahead after all is the luxury residential development with 1,477 properties, a hotel and a golf course promoted by the Saudi Arabian royal family.

However in Estepona there is another bureaucratic hurdle. Construction on the properties now permitted cannot continue until the town’s urban development plan (PGOU) is brought in line with the Junta de Andalucía’s regional land development plan, the POTA.

The greatest impact of the decree in the province of Malaga will be felt in Vélez-Málaga where development has been halted on seven sectors of land (Arroyo El Cabo, El Pinto, Torre Jaral, Valle Niza I and II, and Loma Juanelo I andII).
Here a total of 2,072 properties had been planned, the majority in Almayate and Benajarafe. The plan also partially affects the 35 hectares in La Sierrezuela, Almayate, where another 736 homes are planned.

Land in the Calaceite area of Torrox is also partially affected by the new regulations, although the planned golf course will be allowed. The number of properties would have to be reduced to 3,147.

The limits drawn up by the Junta also protect 54,325 square metres of land near Calahonda beach (Mijas) which had been reserved for 109 apartments, as well as another 303,700 square metres in La Loma del Rey (Manilva) where 303 properties were planned.

In Casares the 16,452 square metres between the Estepona border and the A-7 is protected from development in the plan. The town Hall has planned the construction of 41 properties there.

The regional Environment Department has defended the plan, maintaining that despite the restrictions it still guarantees the urban growth of the coastal municipalities, “but in an ordered manner” and not affecting the few remaining parts of the coastline with no concrete.