Development madness turned Spain into the European country that created the most urban land between 2000 and 2006, according to a recent study by the European Environmental Agency (EEA). A series of satellite images show that over this period, Spain accounted for 24 percent of all newly developed land in the European Union, followed by France with 12 percent and Germany with nine percent. 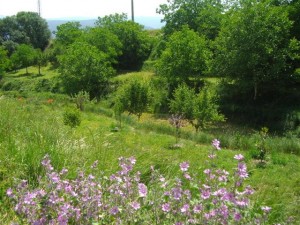 The subsequent economic crisis has served to slow down this trend, benefiting green areas and arable land, as well as some of the animal and plant species that live in them. But the real estate bubble has left behind enough land already classified as available to build on to last the next 35 to 40 years at an average annual pace of around 150,000 new housing units, according to the Public Works Ministry's Urban Information System.

That means there are 709,577 hectares of land that could still be rescued and returned to nature.

It is this great pocket of land that environmentalists want to win back by having it reclassified as green space once more, at least in cases where construction is not imminent. It will not be easy because money, or the promise of it, is at stake.

There is another effect beyond all the square meters of cement: roads and other associated infrastructure are progressively eroding valuable habitats, with terrible consequences for some of Europe's most endangered species.

In the case of Spain, urban land has chiefly taken over agricultural areas. The regions most affected by this artificial occupation are Madrid, the Mediterranean coast (Alicante, Valencia, Murcia, the Balearic Islands and most especially Castellón), strategic parts of Zaragoza, areas near population centers such as Toledo and cities that used to have small populations, such as Ourense or Valladolid.

Untrammeled development has also invaded areas that are prone to flooding - riverbeds and beachfronts - worsening the effects of natural disasters.

Good city planning does not completely prevent flooding, but it can prevent it from turning into a catastrophe.

In 2004, Spain built as many as 600,000 homes - more than Germany, France and Italy. Now things are different. The sector's efforts are focusing on renovation, on making cities grow inward rather than outward. In June, the government approved an urban renovation and regeneration law that states it is "very difficult" for the construction and real estate sectors to continue developing pristine land in the short to medium term. There are currently 723,043 housing units lying empty.

The great challenge now is to regenerate the land. While builders keep waiting for better years to come, environmentalists and geographers are stressing the need to protect this excess of for-building land.