Madrid’s Gran Vía has once again been made whole. The capital’s main thoroughfare was left with a huge vacant lot in 2011, when the headquarters of the Banco Atlántico, at number 48 by Callao plaza, was demolished. For the first time since 1932, work began on a new building on the iconic street. 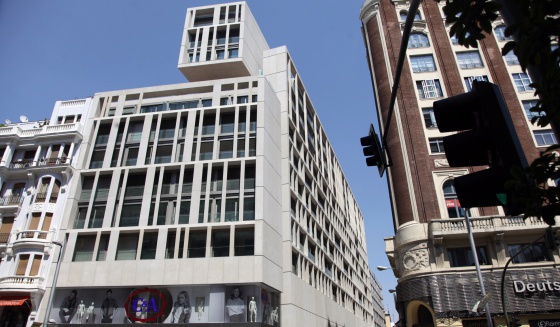 Fashion store C&A has occupied the first three floors of the 13-story, 45-meter-high building since May, and in October, the remainder of the building — comprising 97 luxury apartments — officially opens.

Spanish architect Rafael de la Hoz says that his main challenge in designing the building, which is clad in stone and glass, was to balance modernity with discretion.

“We definitely didn’t want to attract attention. You have to remember that all the buildings in the Gran Vía were built over a short period of time: 20 years, between 1910 and the early 1930s, so all the buildings along it are architecturally similar in style. The job was made more demanding by location: we are right in front of the Capitol cinema, one of the Gran Vía’s most emblematic buildings, so we had to be especially considerate,” he explains.

De la Hoz also faced another major challenge: the site is at the beginning of the Gran Vía’s half-kilometer descent down to Plaza de España, and its next-door neighbor up the hill is the 58-meter-high sprawl of the Palacio de la Prensa. To help the building fit in, he says that he decided to use terracing to create a staircase effect that leads the eye down toward Plaza de España.

The building boasts a roof-top swimming pool, a solarium, a gym and a sauna, and offers a range of properties, from 50-square-meter studios, up to a 310-square-meter, four-bedroom duplex. Prices run from 500,000 up to three-million euros.

Rafael Vázquez, the head of the works, says that half of the properties have already been sold. No expense has been spared, Vázquez explains. “Even the doorhandles have been specially designed, and the taps cost more than 300 euros a set. The showers are solid marble, and the fire doors and safety features are the best and most up-to-date on the market,” he says.