In the crisis years the construction and development industry practically disappeared in the province, where at one point it had employed as many as 100,000 people. Property sales, however, have started to show signs of recovery in 2013 thanks to foreign demand and a continual drop in prices. Violeta Aragón, of the Association of Builders and Developers, admits that the market improvement is greater than expected especially as they “had thought that things would get worse with the increase in IVA (value added tax) and the end of the tax rebate. 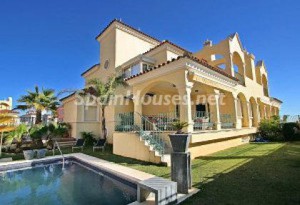 Traditionally foreign buyers have been regular tourists who end up buying a holiday home, but now there are new clients who don’t answer to that profile. This is the case of the Russians “who are not all buying villas worth a million euros,” Aragón is quick to point out.

“It’s true that there is a segment with very, very high spending power, but the truth is that many are small investors who are spending 200,000 to 250,000 euros because what they want is for their children to have an education in a European country.”

For 2014, she estimates that apart from the cases of people building their own homes, which now contribute in a modest way to the slight recovery in numbers of construction projects approved, “we will also see the start of new projects, but that depends on firms and households getting access to credit and on public investment.”

Construction will get moving again and it will start even before the stock of unsold homes has run out, believes Aragón, “because there are some properties for which there is no demand, while people are looking for homes in certain areas, such as town and city centres. There will be no demand for properties built on a hillside tens of kilometres away from a town,” she says.

As far as public investment is concerned, she points out that between January and September all the combined authorities in the province invested no more than 90 million euros in construction, when in 2007 the figures had reached 1.5 billion.

She describes this as “ridiculous”: “They have totally abandoned investment when we have natural conditions of greater quality than other tourist destinations, and we must not lose that because construction also means generating services, schools, streets, renovation; all that has been forgotten. The administration must not cut down its productive investment.”

With relative optimism, Aragón can see light at the end of the tunnel created by unpaid debts by the administrations. The new plan for paying suppliers should allow dozens of firms in Malaga to recover 160 million euros in unpaid debt drawn up by the Junta de Andalucía and town halls, the majority between 2012 and 2013.