These days, with the crisis still raging, seven out of every 10 home purchases in Spain are paid in full. Credit has dried up, and most of those properties still being bought up are paid for with savings or donations from family members. 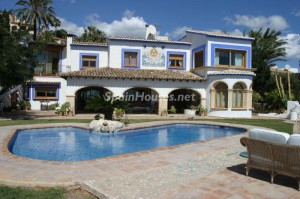 There is another explanation for all the upfront payments: the rise in foreign buyers, who now represent 17 percent of the total, according to figures from the Public Works Ministry. These international clients are paying with funds of their own or with bank loans secured in their own countries.

Before the real estate bubble burst, upfront purchases represented 37.3 percent of total sales, according to the Higher Council of Notaries. That rate has doubled, and in June it represented nearly 68.6 percent of all sales. A study by Pompeu Fabra University (UPF) shows that in the first quarter of 2013, just over 60 percent of transactions did not require a home loan.

The trend is not just being seen in Spain. In the United States, more than half of all home purchases in the last 18 months were paid upfront, according to Goldman Sachs. In 2005, these sales represented just 10 percent of the total. The investment bank says this is due to the growing role of investors in the housing market, together with potential buyers' difficulties accessing loans because of restrictive application conditions.

José García Montalvo, a lecturer at UPF in Barcelona, is working on a paper to explain this trend in Spain. The first reason, he says, is "the strong price reduction that allows buyers with some savings to pay without the need for a loan." This price reduction accelerated during the first quarter of the year, and coastal areas that are rife with vacation homes have seen a drop of more than 50 percent in real terms.

Notary statistics show that it is precisely these coastal areas that have been attracting most of the foreign capital. International buyers now represent 36.3 percent of all home buyers in Girona province, 39.9 percent in Málaga and 40.5 percent in Tenerife. "Although transactions fell again in the first few months of 2013, there are provinces such as Alicante, Murcia, Tarragona and Almeria where sales have picked up," says Luis Montes, director general of Grupo Banco Sabadell. Montes explains that his bank's sales to foreign home buyers - over 25,000 units - reached a historic peak in 2012, surpassing 2007 figures. In Alicante, foreign home buyers are already the majority, representing 54.2 percent of all sales.

The UPF study found a lot of "small domestic investors who are buying homes in off-center locations for 70,000 to 80,000 euros." Luis Montes, of Grupo Banco Sabadell, can attest to the return of "the private investor." "This buyer is diversifying his savings by investing in housing, which means a good number of cash transactions," he explains.

1 thought on “Thanks to a fall in prices, many savers are opting to buy houses outright”