The construction industry is beginning to show signs of life again, thanks to the high-end property sector, which so far this year has experienced a growth which is even greater than that achieved in 2012. 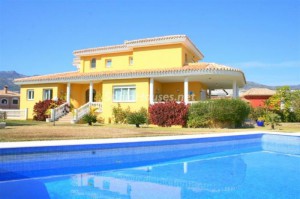 According to figures from the DOM3 association, which encompasses 23 companies related to the construction of this type of property, 60 houses costing more than one million euros were built in 2011 in the triangle formed by Marbella, Estepona and Benahavís, with a global investment of 250 million euros, while 2012 ended with 75 houses built and 300 million euros invested. That was a 20 per cent increase in the number of properties, but this year, growth in this sector is even higher.

The president of the association, Sofía Polo, attributes this growth above all to flourishing foreign markets and greater confidence in the Spanish economy from those who are considering investing in this country. Another factor that permits this sector to perform better lies in the easy access to credit for this segment of the market and the fact that a high percentage of buyers do not need bank financing.

This is not, however, a segment without its own difficulties. The restrictions faced by non-EU buyers when it comes to transferring money from their own countries to purchase the properties and the low competitiveness of Andalucía in fiscal matters compared with other destinations are currently the principal obstacles.

For José Antonio Muñoz, of Analistas Económicos de Andalucía, this sector in Marbella is beginning to perform well because it is an atypical market, with an important presence of foreign clients who tend to be very well-informed, so the fact that they are purchasing properties is a good sign for the province overall.

In José Antonio Muñoz’s opinion, the fact that the construction sector in Marbella is showing signs of activity when overall there are still no figures to objectively confirm a recovery can also be due to the subjective perception that the bottom has been reached and the only way now is up. Also, he says, a market with better information than average may be detecting interesting investment opportunities, and this could mean that recovery is not far off.

In the province of Malaga overall, the presence of foreign operators in the property market is higher than average; about 40 per cent of all sales are to non-Spanish buyers. The improvements in this market is due to the same factor that has strengthened exports in the Spanish economy and led to a huge growth in foreign tourism last summer. After the adjustment caused by the crisis, Spain is beginning to be seen as a place of opportunity.

The set-up of the markets has barely changed. The high-end properties in Marbella and the surrounding area are still mainly bought by British and Scandinavian purchasers, with a growing number of Russians and an emerging presence of French buyers, something which has increased in recent months as a result of fiscal pressure in France, explains Sofía Polo.

This increase in activity in the construction sector has been noticed at Marbella Town Hall, where 25 per cent more applications have been made for licences for major building works so far this year compared with the same period in 2012.

The recovery in construction can also be seen in more subjective ways, such as the continual requests for information at the Town Planning office from investors who are interested in obtaining land, not only for housing, but also for private enterprises such as schools, hospitals, clinics, residences for the elderly and shopping centres.