British expats, as well as German and Russian buyers, are helping Spain's property market out of the doldrums, with a lot of interest in luxury developments in Majorca. 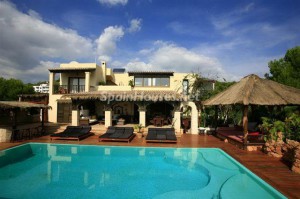 Spain's property market is showing more green shoots of recovery, with the country's House Price Index reporting the smallest decline in prices since the end of 2010, according to the National Institute of Statistics.

House prices still fell overall - but Majorca bucks the trend, reporting property price rises of 4.8 per cent in the third quarter of last year, compared with the same period of 2012, according to the Spanish development ministry.

Three other regions reported prices rises in the House Price Index - Navarra, with growth of 2.8 per cent, Extremadura, up 2.2 per cent and Madrid, up 0.3 per cent. However, these figures fall far short of Majorca's growth, which estate agents say is boosted by foreign buyers, particularly those with a substantial sum to spend.

This is backed up by commentary from Emigrate.co.uk, which says the luxury property market is faring the best throughout Spain, particularly in beachfront locations throughout Ibiza and Majorca.

This is boosted in part by a Spanish government incentive scheme, which offers residency to non-EU nationals purchasing a home worth more than €160,000. It's part of an ongoing campaign to attract foreign buyers - not just Britons, but also Chinese and Russian international buyers.

Certainly, the Council of Notaries has revealed that foreign ownership in the Balearics has doubled in the past five years. German buyers made three times the number of house purchases in 2012 (1,303) than 2008 (396). Britons always feature heavily in the Balearics - and flight arrivals from the UK to the islands were up 7.9 per cent in the third quarter 2013, compared with the same period a year previously.

Russian and Nordic house buyers are snapping up properties across Majorca, Menorca and Ibiza. In 2008, there were 35 Russian purchases and by 2012 this figure was 86. Only 27 properties were bought by Swedes in 2008; this figure rises to 168 in 2012.

While some are looking to snap up property reclaimed by the banks - many of which are listed at 30 per cent below their true value - there are also beachfront developments where expats can snap up a bargain off-plan.