The hundreds of thousands of empty homes across Madrid has spawned a black market for cheap housing in which groups illegally break into, and then let, repossessed properties. 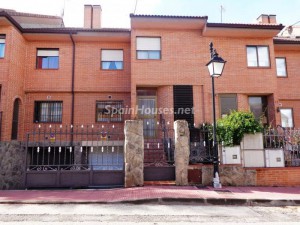 Almost all the cases involving the properties, most of which now belong to Spanish banks, are identical, said Vicente Pérez, from a residents group, the Federación Regional de Asociaciones de Vecinos de Madrid.

While prices vary greatly, it generally costs from €1,000 (£830) to €2,000 to "buy" a repossessed property, El País reports. Those who cannot afford the fee can instead choose to rent for a few hundred euros a month. The price often includes electricity, gas and water, and sometimes even heating.

The homes are guaranteed until a judicial process issues an eviction order, said Pérez. That process that could take up to two years.

Exact figures on how many people are taking part in such arrangements were hard to come by, he said.

Nearly 15,000 households in Madrid were served eviction notices in 2012, according to official figures from the courts. Coupled with sky-high unemployment rates, this has led to "infinitely long" waiting times for subsidised housing, said Pérez. It has left families, immigrants and others desperate for affordable housing in the capital region.

The "landlords" of this black market range from people just looking to make some extra money to groups with criminal connections.

Spain's Guardia Civil police force was forced to acknowledge the problem last month when it responded to neighbours' complaints about an illegally occupied flat. Police arrived at the building as a prospective tenant was being shown around the foreclosed flat.

Two siblings, aged 33 and 28, were arrested for breaking and entering foreclosed properties and illegally renting them out. They targeted immigrants, who were charged €400 a month for flats in the south of the city.

Manuel San Pastor, a lawyer for the group Plataforma de Afectados por la Hipoteca, said the root of the problem was Spain's "hundreds of thousands of empty properties". His group provides support to Spaniards facing eviction, be it by negotiating with the banks or backing movements to occupy empty houses.

Just 10 years ago Spain was in the throes of a construction boom, with developers building hundreds of thousands of homes a year. The bubble burst in 2007, leaving its relics scattered across the country, including more than 300,000 empty homes in Madrid.

San Pastor said: "They're still evicting people from their houses. They're leaving no other alternative but for people in need to enter these houses."

The lawyer condemned those whom he believed were taking advantage of the situation to make a profit.

Neighbourhood associations in Madrid have urged the owners of these empty properties to take responsibility.

Instead of trying to let or sell the properties at the current market value, which had dropped an average of 45% in the Madrid region since 2007, he said, banks were holding on to the properties, hoping to sell when the market recovered. In the meantime, entire communities were paying the price.

The latest census data indicate a total of 3.4m houses sitting empty in Spain alongside another nearly half a million properties that were abandoned part way through construction.

Other municipalities have launched initiatives to penalise the owners of empty properties in high-demand areas; in Barcelona threatening fines of up to €100,000, and in San Sebastián, in the Basque country, a 50% surcharge on property taxes.