More than 50,000 properties in the countryside of Malaga province have still not been made legal, despite two years having passed since the Junta’s decree came into force. 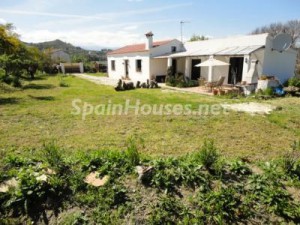 Associations of owners of properties built on land which was not zoned for construction lost no time in expressing their criticism of the new regulations. They consider that these did not offer a practical and effective solution to the problems they were facing in trying to make their properties legal.

The situation has changed little, if at all, two years after the decree came into force. The councils, believe the regional authority should step forward; the owners of these properties are demanding a proper means of making their houses legal and they consider that what has been done so far is of no use whatsoever.

It is of no use, they say, because the best that 80 per cent of the owners of illegal properties can hope for is that their houses can be considered as Asimilado a Fuera de Ordenación (AFO), or outside of regulation; these are buildings which do not conform to the law and town planning regulations, cannot obtain an occupancy licence and against which no action can be taken because the period of time in which this could be done has expired.

These properties are permitted to be connected to basic utilities such as electricity and water, but remain in a kind of limbo. Being classified as AFO does not make them legal in any way.

The owners are hoping that with the passing of time there may be a change in the direction of the Junta’s town planning policy with regard to the illegal houses that are scattered throughout the countryside in the province, from Manilva to Nerja and from Alcaucín to Tolox.

The Junta admitted in January 2012, when the decree was approved, that only about 10 per cent of the illegal houses would be able to be made legal, a further 10 per cent would remain illegal and the rest, the majority, would have to be registered as Asimilado a Fuera de Ordenación.

The coordinator of the Ecologistas en Acción environmental group in Malaga province, Rafael Yus, said, “It is clear that the councils are not very interested in applying the decree because it isn’t popular, partly because it would involve an additional cost for those affected and partly because they know that if they apply it they would lose votes. It would have an electoral and social cost. For that reason we have asked on different occasions for the powers over land which is not zoned for building to be passed from the Town Halls to the Junta.”

The Save Our Homes in Axarquía (SOHA) association has been one of the most active in demanding an amnesty from the Junta for country properties. This association, whose members include more than 400 foreign owners of illegal properties, has even asked for the British ambassador to Spain, Simon Manley, to mediate in finding a solution to the problem of illegal houses, although with no result so far.

SOHA’s argument is that the owners built or bought their houses in good faith, so they are not at all satisfied with the solution which is being offered by the Junta de Andalucía. “Those of us whose licences have been annulled cannot hope to make our properties legal and the best that people with no licence can hope for is that their properties will be declared as being outside the regulations, and we are not in agreement with that,” insisted the president of the association, Philip Smalley.

1 thought on “More than 50,000 properties in Malaga province have still not been made legal”