The regional government of Madrid has given Banco Santander the go-ahead to begin work on redesigning the interior of the Edificio España. Once Spain’s tallest building, the 117-meter-high tower block dominates Madrid’s Plaza de España, but has been vacant since 2005. 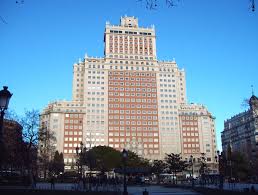 Santander has already found a buyer for the 1950s building once the project, which has been designed by Norman Foster and Carlos Lamela, is finished. Chinese businessman Wang Jianlin has offered €260 million for the deal.

The interior of the building will be ripped out and is to be converted into a shopping mall, a hotel and around 300 luxury apartments. The distinctive red-brick façade and sides will be maintained.

According to information seen by EL PAÍS, the plans proposed by the bank will see the commercial space of the building increased from 10,000 to 15,000 square meters, creating a huge retail center in the heart of the capital.

Having been given approval by the regional government for the project, Santander is now finalizing talks with City Hall to change the building’s status so that work can begin.

The Edificio España was originally listed as a grade-two building for its historic and architectural interest, but Santander is hoping to see that reduced to grade three, allowing it to pull down part of the rear of the structure as part of its refurbishment project.

Santander’s plans for the building have been held up because the the Edificio España was declared an Asset of Cultural Interest in 1993 by the regional government. But Madrid’s Heritage Commission has now decided that the building is in danger of falling into disrepair and that work should go ahead. Final approval of the plans will still be required from the regional government and the Heritage Commission.

The regional government and City Hall, both controlled by the Popular Party, say that the project will provide an economic boost to the capital. However, the Commission will now have to study the plans in detail, approving demolition work on each floor. The College of Architects has organized a committee to give its opinion on the project and the overall reform of Plaza España, which includes another emblematic building, the Torre de Madrid, designed by the same team of Julián and José María Otamendi a few years after the Edificio de España.

Santander bought Edificio de España in 2005 for €389 million. In 2007 it presented a project to redesign the interior, but this came to nothing. The potential future buyer of the building, Wang Jianlin, is a construction magnate with a €16.6-billion fortune. He heads up Dalian Wanga, a company specializing in hotels and luxury shopping malls.