On the golden mile that extends along the coastline between Estepona and Marbella there is still room for a 24 carat urban diamond. A place in which the terms ‘luxury’ and ‘exclusive’ do not go far enough, because of the great fortunes that are needed to reside there. In the 900 hectares of La Zagaleta residential development, in the municipality of Benahavís, not just any fortune is acceptable. 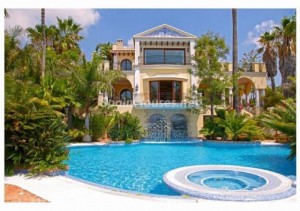 The 230 property owners have the right to veto prospective neighbours who might put at risk the anonymity of this happy Arcadia, which sits in the foothills of the Serranía de Ronda and has views of Gibraltar.

Even the simplest home costs ten million euros here and the most expensive costs three times as much. When somebody presents their credentials as a purchaser, the other owners do not ask how many times he or she has featured on the front pages of newspapers - they ask for a guarantee that they are worth ten times the price of the house they are going to buy.

With a philosophy like that, this residential development has become a place of refuge for the truly powerful who hold the reins of a substantial part of the world economy and who appreciate the worth of real privacy. People such as Oswald J. Grübel, for instance, who has exchanged handling the fortunes of UBS and Credit Suisse, Switzerland’s biggest financial institutions, for a much quieter golden retirement as CEO at La Zagaleta.

So low is the profile that even Google’s Street View team had to put its camera away and make itself scarce when it wanted to tour the 60 kilometres of private roads here. But opacity also has its risks and these invisible profiles only come to light when there are rumours of a possible new purchaser. Speculation about Russian president Vladimir Putin being interested in investing in the area has been flying around the 900 hectares of La Zagaleta for the past two years. Even estate agencies on the Malaga coast have been using this confusion to ‘court’ Russian investors. However, the doubt has now been removed as it has recently become known that the new neighbour only shares the same nationality and initials with Putin: it is fishing magnate Valery Ponomarev.

Although these days barely half a dozen Spanish families form part of this select club, La Zagaleta remains a dream-come-true for one Spanish gentleman. Nearly 90 years old, and with all the significance of Marbella luxury tourism behind him, Enrique Pérez Flores handed the baton of ‘mayor’ of this private municipality to Grübel just a few months ago.

It was Pérez Flores who, in 1991, brought together the investors to buy the nearly ten square kilometres of this hill for about 30 million euros, after it had been embargoed from its previous owner, Saudi arms trafficker Adnan Kashoggi, and auctioned.

There were already plans to replicate the construction boom of the coast and build more than 3,000 properties on the site. It was Pérez Flores who insisted that only one tenth of this figure should be built, and with the most luxurious criteria that he could possibly find. People called him “romantic” and “crazy” for not making the most of the opportunity in that golden age of the ‘golden mile’ of Marbella.

Nearly a quarter of a century later, the result is an unrivalled image of properties, gardens and facilities.

During those years, an overall investment of two billion euros has provided the area with a golf course, lakes, an equestrian centre and a heliport with a direct service to Malaga airport. Houses in which Andalusian architecture is fused with Tuscan design, marble floors, indoor and outdoor swiming pools, all to die for... no two houses are the same, but the Arabic roof tiles lend the complex an even more paradisiacal air when seen from the sky.

There are also 120 multilingual and professional staff to attend to any needs of the residents. Because of all this, Oswald J. Grübel can boast of having inherited a brand that has not suffered from the turbulence of the normal property market and this allows him to pursue a strategy of expansion in the only part of that market which is still profitable: total luxury. With land in Madrid and Andalucía and contacts in other Mediterranean countries, La Zagaleta is seeking to become one of the world’s luxury property brands.