The Spanish government is planning to tax homes that produce their own energy through solar power and store some of it using batteries. 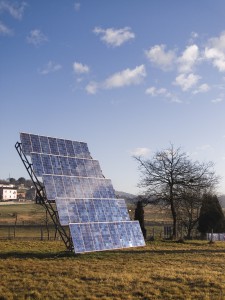 A draft decree prepared by the Industry, Energy and Tourism Ministry establishes a new fee to discourage the use of batteries or other storage systems by people who produce electricity, with solar or photovoltaic panels for instance, and who are connected to the national power grid.

Under the new rules, these self-reliant consumers will not be able to use products such as the Powerwall battery recently launched by American automotive and energy-storage company Tesla, and will additionally be penalized for the storage systems that come included with the latest generation of solar panels.

Only off-grid consumers who have their own, completely independent energy-production systems will be able to use batteries without being penalized for it. Modern storage devices typically have an autonomy of two hours or so, making it difficult to be entirely self-reliant.

The new fee will not affect systems without storage, which work only for instantaneous consumption.

The tax will depend on the wattage that each consumer is getting from their energy provider. Prices will range between €8.90 and €15.30 per kilowatt (kW) for wattage of less than 15 kW connected to low-voltage services. This amount should be high enough to act as a deterrent, said Jorge Morales de Labra, an energy regulation expert, in statements made to the news agency Europa Press.

The Spanish government’s attitude is in contrast to other countries, such as Germany, which is encouraging the use of solar panels with batteries.

To further discourage self-production, the draft legislation also makes it clear that any energy surplus that individual self-producers feed back into the grid will not result in any monetary benefits. Businesses who do so (and who are high voltage customers) will, however, be allowed to turn a profit on their surplus.