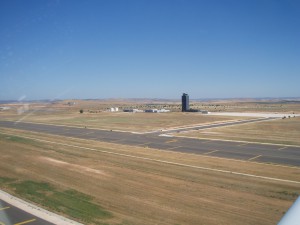 According to papers filed with the Mercantile Register, the group listed €4,000 in capital from China but stated that members of the consortium include both Chinese and European investors. It also explained that “various Chinese companies” are interested in using the airport as “a gateway to Europe” for their importing businesses.

Tzaneen International was the only bidder that came up with the €2 million bond required by the court to take part in the auction.

The Ciudad Real facility, also known as Don Quijote Airport, opened with much fanfare in 2008 as the first installation of its kind in Spain built with private capital, at a cost of €450 million. But passenger demand was low and it was finally shut down in 2012.

In February 2014, the owners tried to put it on the market for €100 million, but soon dropped the price to €80 million before the court stepped in to call an auction.

In court papers filed on Friday, the Chinese group explained that it submitted a low bid because it would need to reapply for aviation licenses and spend between €60 million and €100 million to upgrade the facilities.

The court had appraised the airport at €40 million but set a minimum offer of 70 percent of this amount – €28 million – for prospective buyers. It also issued a 20-day grace period for other possible bidders to come up with the €28 million.