The project for a new shopping centre in Torremolinos is beginning to take shape after a decade of being caught up in different bureaucratic processes. The local council 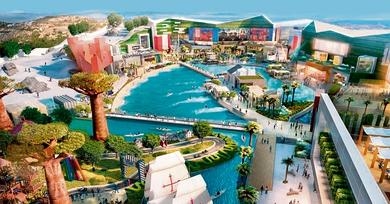 wants this major project, which Intu Properties wants to build in the town, to come to fruition as soon as possible. The shopping and leisure centre, which would be the biggest in Andalucía, will include a ski slope and a giant wave pool for surfers, among its other attractions.

This new commercial centre will be on a 195,000 square metre site between the Palacio de Congresos conference centre and the access to the motorway, in the area called Molino del Viento.

For the works to start, the developers are only waiting for Torremolinos council to approve the revision to the Urban Plan, which may be done at this November’s council meeting. If all goes according to plan, the works could begin in the first quarter of 2016 and will be completed in 2018.

The developers of this project have already begun to hold meetings with different business owners in the town to show them what the commercial centre will look like when it is finished. The plans show that there will be a large central lake as a focal point. Although the developers insist that there could be changes to the plans, there is no doubt that this will be something totally different to anything which currently exists in Andalucía.

The directors of Intu have also begun to sign agreements with companies who are interested in opening a branch of their businesses in the shopping centre. One has already been agreed with Hamleys, the most iconic toy shop in the United Kingdom, and this would be its first branch in Spain. The firm, which opened in London in 1760, is expected to be a major attraction.

Intu, which owns shopping and leisure centres in Zaragoza and Asturias, says the project in Torremolinos will cost around 400 million euros and will create 3,000 jobs. The project was reactivated last March when Intu advised the London Stock Market that it had bought the 30 hectares of land for 37.5 million euros. The vendor of the site was British investment group Peel Group, a company which began the project in 2005 and also holds shares in Intu.

Among the obstacles which remain is the Urban Plan, which is expected to be provisionally approved in November.

The deputy mayor of Torremolinos, Maribel Tocón, says the document only lacks a few final details, none of which have anything to do with the commercial centre but which are related to the development of the nearby mountain range.

She says she is also confident that the Junta de Andalucía will not turn the project down - as it has done five times in the past - because on this occasion the application will be accompanied by the document the regional government had demanded about the water supply. “We will be presenting an Urban Plan with all the modifications and corrections they wanted,” says the deputy mayor.

After that approval, which the Junta de Andalucía is not expected to oppose if the uses are correct under the new Urban Plan, only two obstacles will remain and they shouldcome to nothing. The first is the appeal which the Supreme Court is to hear after the TSJA declared the Town Hall’s plans for the land on which the commercial centre is to be situated null and void; the other is opposition from the ACET business association, which has also presented two appeals to the Supreme Court but now appears prepared to negotiate with the developers.