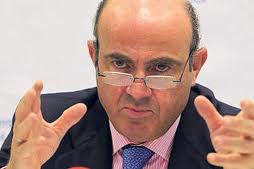 "Spanish banks face deeper losses on 176 billion euros of real-estate assets. "You have to remove any kind of shadow of doubt over the valuation that you have of these assets in your balance sheet,” Luis de Guindos, tipped by newspapers as a contender for finance minister in a new People’s Party government formed by Rajoy, said in an interview.

Reluctance of banks to lend threatens to hamper economic growth, undermining trust in government finances and threatening to create a “vicious circle,” said Alberto Recarte, who worked as an economist for the People’s Party from 1992 to 1996. Spain’s 10-year borrowing cost soared to more than 6.3 percent yesterday, up from an average this year of 5.4 percent.

Spanish banks have set aside 105 billion euros since 2008 to absorb a property crash that has left them holding unsold land, apartments and warehouses. The “cleanup and restructuring” of Spain’s banking system is the top pledge Rajoy has made in his electoral program to fund the country’s recovery by boosting the supply of credit".