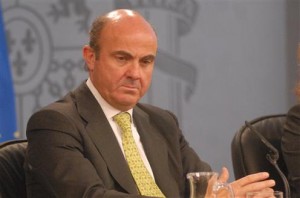 The performing loan ratio for mortgages currently stands at 2.8 percent, compared with 21 percent for credit to the real estate sector. The banking system’s loan portfolio is currently around 1.76 trillion euros, of which 656 billion is in the form of mortgages to individual homeowners and around 310 billion to property developers. In a decree approved earlier this month, the government increased provisions for loans to developers to up 45 percent of the value of the credit.

French President François Hollande suggested that Spain would need the European rescue, at what the Minister De Guindos said: “Probably the French president knows more about the banks in Spain than the French banks. Spanish banks do not require a bailout from the European funds.”

The leader of the Socialist Party, Alfredo Pérez Rubalcaba also said: “We have the capacity to do it alone, and I believe we should do it on our own.”

“Institutions are more important than people and the Bank of Spain as an institution is of the maximum solvency and credibility,” De Guindos said.