All is not lost: they say that the end of the property crisis is coming from the East, where Spain offers sunny weather, good services, excellent communications and now, cheap housing too. This has become a land of opportunity for a certain type of foreign client with money in their pockets. Mortgage loans may have dried out, but that does not matter; these customers pay in cash. 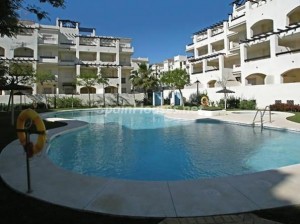 The Mediterranean region is producing a new model of real estate opportunity: the two-bedroom apartment for 60,000 euros. This is what some banks had been trying to avoid for a long time: demolition prices. But there it is. Reality has moved faster than the government and its bad bank project.

There are two ways of looking at life in the real estate sector. Looking out from the top, on the 19th floor of Madrid's Torre Picasso, the workplace of investment fund consultants, the situation is viewed with a cold, cautious eye: "In the short term, the bad bank will act like the casting-out-nines technique. Things will never be the same," says Rafael Roldán, an executive at Ernst & Young. Or, in other words, big capital has yet to make a move.

But down below, at street level, inside the sales offices, there is a certain degree of optimism. "We're starting to sell again," says Brigitte Castaño, a representative of the realtor Remax in Alicante. Castaño is enthusiastic about the new clients who are coming to the Spanish Mediterranean: a cosmopolitan crowd made up of Russians, Scandinavians, French, and her personal favorite, Belgians. Alicante is also currently witnessing a new trend that is far from anecdotal; the arrival of Algerian clients who purchase homes in the city. Cash-carrying buyers are also showing up further south on Costa del Sol, "where 90 percent of sales are to foreigners," says Leonardo Cromstedt from Marbella.

So are these the signs of green shoots along the Spanish coast?

"This does not constitute a market yet," says a consultant to a foreign bank in an indifferent tone. For the big consulting firms, real business will arrive when the investment funds return. But for now, they are waiting to see what happens. "A 50-percent price discount is not enough, so everything will depend on how the bad bank turns out and how its assets are valued."

According to this expert, who declined to see his name in print, the investment funds are waiting for demolition prices before moving in again. "They are waiting for 70 percent [discounts]."

So the key seems to lie in the demolition prices. Is that what is attracting the Russians, the Belgians, the Germans and the French? Rafael Roldán, of Ersnt & Young, seems to think so: "Deep down, what's going on now is a dress rehearsal for the bad bank. Prices are adjusting to reality. Sales are being conducted. There are investors coming in from abroad who are not contaminated. But it will be important for the government's bad bank to be a success." So while the big clients await news about the bad bank to make their decisions inside their lofty glass offices, the rest of the world is getting a move on.

It might be a moderate move; it might certainly not be causing significant changes to absolute figures, but this market - which is not even a market to some consultants - has a life of its own.

And when you look at the big figures, the real estate sector has been a deserted place for the last five years. The statistics show red numbers year after year. And indicators point to a stubborn cycle of decadence: prices go down, sales drop, real estate agencies and construction companies shut down, cement production dwindles -- and the banks that participated in the game most enthusiastically fall with them.

Those news stories about mayors signing agreements to build thousands of homes have given way to images of local residents camping out to avoid foreclosure. There have been two eviction-related suicides.

It would seem that nobody's buying around here. What's more, it's a safe bet that some of those who bought a property would happily return it to the bank if they could. And yet 356,656 homes changed hands in 2011, according to notary figures. It might seem like a low number compared with the 853,568 sales in 2007 (the last glory year for the sector), but it is a sign that there is a far from insignificant business out there.

The situation on the coast is a case in point. There are parts of it where you can sense a contained euphoria from the reports by the property agencies. There is a new kind of buyer: informed clients who show up with money in their pockets and who are not seeking large properties. Typically, these clients are seeking one or two-bedroom apartments for a price as far below 100,000 euros as possible.

"The British are no longer buying on the same scale," explains Castaño.

"The Belgian and Scandinavian markets are doing very well now. They are aware that the market is very low and that the time is right to buy a home. They pay in cash. I have only handled two mortgages this year: a civil guard and a Belgian who was just a bit short of cash. The national market is non-existent," the realtor says.

This vision of reality coincides with that of Leo Cromstedt, a sales representative for the same company in Marbella, who says that 90 percent of his clients are foreigners -- mostly Norwegians and Swedes -- who pay cash. If 4,758 homes were sold in 2004 in Marbella, there were only 2,286 sales in 2011, so prices will not stabilize until sales reach around 3,500 a year, he says.

"Clients have a lot of information thanks to the internet. They know everything that's up for sale. If they find an area they like, they seek everything that's on sale there at the cheapest price. Clients want to be in charge. They look for good pricing and they're not in a hurry."

There are particular cases like Benahavis, a municipality located next to Marbella, where home sales have increased 219 percent in just one year.

What's the secret? Leo Cromstedt explains: "Marbella was more competitive for the same prices and for three years they sold nothing. So they knocked down their prices, by as much as 70 percent. And the sale boom began."

Similar opinions and statistics show up on other parts of the coast. In Almería there have been Russian buyers ever since the first charter flights to Moscow were inaugurated. In Murcia and Alicante, realtors are surprised at all the French buyers. The Costa Dorada is a Russian bastion. Figures provided by the General Council of Notaries confirm these impressions: in 2007, only 1.1 percent of buyers were Russian, compared with eight percent now. French buyers increased from 1.6 percent to 8.4 percent.

And the Germans? They are buying more holiday homes than ever, but they would rather do so in their own country. Half their holiday properties are in Germany, followed by Spain (11.3 percent). According to a study by the specialized real estate agencies Fewo Direkt and Engel & Völkers, the percentage of holiday homes in Spain has risen one point in three years. The island of Mallorca now contains three percent of Germans' holiday homes, ranking third after the Austrian region of Tyrol and the US state of Florida.