There is one construction-based sector where the machines have not stopped working and where at times it is difficult to find qualified staff to carry out certain jobs. With building cranes in hibernation and more than 200,000 people out of work in Malaga province that may be hard to imagine, but it is true. This sector is within in the triangle formed by Marbella, Estepona and Benahavís and last year it generated more than 250 million euros worth of business and about 4,000 jobs, of which 1,000 were direct. 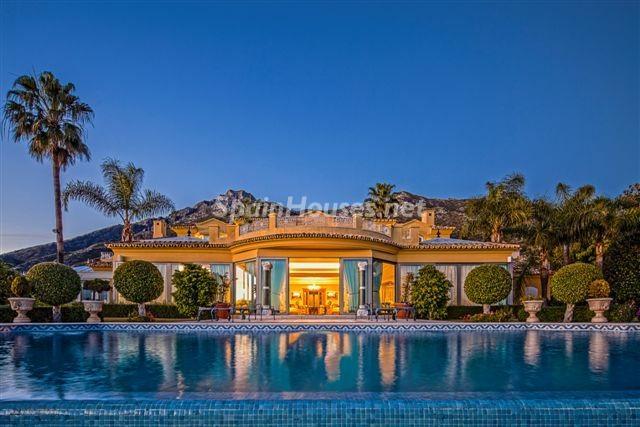 During the past year about 60 properties were built within the aforementioned triangle of Marbella, Estepona and Benahavís and whose cost per unit was at least one million euros. Apart from the figures mentioned above, this business also generated another which the offices of the Hacienda tax authority will value above all others: 22 million euros in IVA (value added tax).

These amounts are far from those achieved during the boom years, when the annual figures were at least double those attained at present, but this sector has managed to stay afloat and, unlike the rest of the property development industry, it did not sink when the crisis cut off the flow of finance and showed the size of the bubble it had formed.

In fact, it continues to remain afloat and away from the ups and downs of the rest of the property sector. It neither grew excessively during the years when the bubble was formed, nor did it plummet when the crisis came.

With top-of-the-range properties - those who work in the sector avoid the word ‘luxury’ because of the stigma they believe it causes - there is the advantage that clients do not need finance or have easy access to it. However there is also the complex task of satisfying people who can be considered the most demanding purchasers in the world.

The luxury houses are mainly found in a few specific areas. La Zagaleta, Guadalmina, Los Monteros, Sierra Blanca and La Quinta are some of the most popular, although the triangle formed by the three municipalities is characterised by its scattering of properties of this type.

There is one factor which is usually unalterable when it comes to defining what we are talking about when we mention a ‘luxury’ property: the environment. If a top-of-the-range house is surrounded by others of the same quality, its value grows. Space is another of the most highly valued aspects. These are houses built with a maximum of two storeys above ground level on no less than 1,500 square metres of land and which are at least 350 square metres in size. They usually have outdoor and indoor swimming pools, a gymnasium, a spa, a cinema and something else which has become inescapable: nowadays nobody builds a luxury house without a lift.

However, paradoxically in a province where the construction sector has been particularly badly affected by unemployment, finding skilled people to work with the highly complex and expensive materials which are used for these properties is not always easy. The companies say they find a lack of training when they need to employ specialists in the treatment of marble, installations or the latest in electronics.

Because of this, the sector is preparing a strategic plan for top-of-the-range properties which aims to draw the attention of the authorities to the need for improved training in those aspects, because this is essential if Marbella and its area of influence are to continue as world leaders in this industry.

Above all, this is because the chain of wealth creation does not end with the construction of the house. The owners of these properties are the people who have the highest purchasing power and although they usually spend most of the year abroad they also travel to the Costa del Sol several times a year.

Also, most of these properties have permanent household staff. Nearly all the owners employ between two and five people on a permanent basis to take care of maintenance, cooking, cleaning and gardening duties . This is not a negligible factor. In fact, it is practically one small -to-medium sized business per top of the range house.

Almost all the purchasers of properties of this type are foreigners - Scandinavians, British, French, Belgians, Arabs and Russians are the most active markets at present - so knowledge of languages is essential, but so is knowledge of the latest materials, the latest technology and the latest fashion in decor. Anonymity is one of the aspects most valued by these clients and is one of the reasons they choose the Marbella area, where they are unlikely to be recognised. They also tend to be demanding about matters such as the use of energy and respect for the environment.