Total home sales in Spain in August plunged 15.3 percent from a year earlier to 23,552 as rampant unemployment and downward pressure on wages more than offset the impact of ongoing falls in prices, according to figures released Monday by the National Statistics Institute (INE). 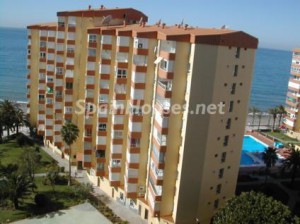 The fall was the biggest registered this year and the fourth of its kind in a row. The government announced in the summer of last year that tax relief on purchases of family homes would disappear at the start of this year, prompting households to buy in anticipation of the change. The administration also announced at the same time that the VAT rate on new homes would be raised from 4 percent to 10 percent.

The INE’s figures are based on transactions recorded by property registrars, meaning that the actual sales took place about two months prior to that.

Despite the sharp fall in August, sales for the first eight months of the year were up 1.2 percent from the same period a year earlier, in part spurred by growing interest by foreign purchasers. The number of transactions paid for without recourse to a mortgage accounted for 70 percent of the total.

According to figures released by the INE, house prices have fallen 37 percent from their peaks just before the bubble burst. The jobless rate at the end of June stood at 26.3 percent.

Of total sales in August, 44.6 percent were new homes and 55.4 percent existing homes. In the first eight months of the year new home sales have fallen 3.3 percent, while sales of existing homes have risen 5.5 percent.

By region, home sales in August rose 20.4 percent in Navarre and by 5.1 percent in La Rioja. The only other region where sales increased was Catalonia, where they were up 2.2 percent. Sales fell in the rest of the country with the biggest declines in Cantabria, with a drop of 39.2 percent, and Asturias where they were down 38.2 percent.