It is now several years since the property bubble burst and it has taken several other sectors with it, resulting in situations that would have been unthinkable years ago. One of these is the Golf Hills Village development which is only 95 per cent completed, but which has now been put to auction. It is the first time in Spain that this has occurred with an unfinished development, but the situation is not as exceptional as it may seem. Since the year 2000 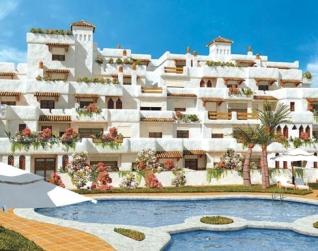 BNP Paribas Real Estate, which is handling the transaction, has carried out 148 auctions involving 11,800 properties and a figure of more than 500 million euros. The auction will have a reserve price of 7.3 million euros and those interested will have to make sealed bids for amounts higher than this in front of a notary. The bids will be opened on March 18th and the highest bidder will be able to take over the apartments and sell them on, or make whatever use of them they may wish.

The owner of the development is the Midamarta company, which is part of Caja Castilla la Mancha. This company began to acquire properties from the bank but they were transferred to the Fondo de Garantía de Depósitos de Entidades de Crédito (FGC) after the Bank of Spain intervened in the savings bank, towards the cost of the 1,300 million euros that had been used to save it.

The Golf Hills Village development is close to Selwo and is nine kilometres from the centre of Estepona (Malaga). There are 152 properties, 158 garages and 67 storerooms as well as communal areas, covering a surface area of 14,762 square metres and 4,711 square metres underground.

The company that is auctioning the buildings says this is normal practice because the system allows all types of assets to be sold in a short space of time. Purchasers are usually international investors and developers and this is even more likely in this case as the conditions of the development make it perfect to sell the properties on to foreigners who are looking for a second home in Spain.

2 thoughts on “Unfinished Development in Estepona Goes Up for Auction”