The property market in Marbella is recovering and the town is now showing signs of being a leader in this sector. This emblematic town on the Costa del Sol ended last year with a total of 3,115 property sales , a figure which is similar to that of 2007, before the bubble burst. In terms of total figures, Marbella is now in a similar position to Malaga city, where the recovery in the property market has failed to take off and the number of sales has fallen for three consecutive years. 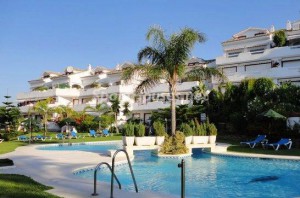 The results for property transactions last year, which have just been released by the Ministry of Development, reveal that Marbella is the Spanish town in which the number of sales has increased the most, by 23.6 per cent.

With this increase, Marbella has achieved its second consecutive year of growth. After 2011, when the number of transactions dropped slightly compared with the previous year, the town registered an increase of 11.5 per cent in 2012 and 23.6 per cent last year and the forecasts for the present year are optimistic.

The increase in property sales in Marbella, although it is the biggest, has not been unique on the Costa del Sol, as other towns have also seen a rise in the number of property transactions.

There were increases in Estepona (9.34%), Mijas (4.1%) and Benalmádena (0.5%). Taken as a whole, the western coast of the province showed an increase of 0.85 per cent, in contrast to a 3.64 per cent decrease in Malaga city and the eastern coast, where there was a drop of 11.5 per cent.
Even so, according to these latest official statistics, the performance of the property sector in the province cannot be considered totally negative if it is compared with Spain as a whole, where only two provinces showed annual increases: Santa Cruz de Tenerife (2.4 %) and Las Palmas (0.6 %). All the others registered a drop in the number of property transactions and, among them, Malaga’s figures were among the best because its decrease of 3.6 per cent (a total of 18,639 transactions), was only greater than that of Alicante, which registered a drop of 1.5 per cent. The remainder of Spanish provinces showed greater falls.

These results place Malaga province as one of those which is showing the greatest resistance to the difficult situation which persists in the property sector.