To find solutions for properties built on land not zoned for construction but which has been subject to subdivision and can therefore not be included in Decree 2/2012 which relates to making properties legal, and those properties for which the works licences have been annulled. These are two of the objectives of the 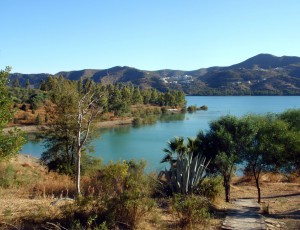 Save Our Homes Axarquía association – Salvemos Nuestras Casas en la Axarquía (SOHA) in Spanish - which is formed by about 400 foreign residents who own illegal properties, in a series of meetings it has begun with the Junta de Andalucía’s general planning directorate to look for solutions to the problems of illegal houses.

The president of SOHA, Philip Smalley, who is also a Partido Andalucista councillor in La Viñuela, and the association’s secretary and town planning councillor in Alcaucín, Mario Blancke, had a meeting on 19th June with the general director of the planning directorate, Rafael Márquez, to discuss the problem of houses which have been built on land not zoned for construction which had been illegally subdivided. According to article 185.2 of the Law of Urban Planning of Andalucía (LOUA), there is no time limit after which the authorities can no longer demand that the land be returned to its legal state and this means that the owners cannot hope to make their properties legal.

Recently, Alcaucín Town Hall has annulled 46 licences for segregation, works and first occupancy which were granted between the years 2001 and 2004 for the construction of 13 properties, because the division of the land into separate plots is deemed to have been illegal.

According to Mario Blancke, “the pepartment has promised to look into our request. Our initial impression is that the attitude of the Junta has changed and it is more prepared to listen to those affected and look seriously at ways of resolving the matter. It is the first time we have come out of a meeting with the Junta with this impression. If this had happened earlier, it is certain that the conflict over the illegal houses would have been resolved by now.” At the same time, SOHA has asked the Junta to look at solutions for properties whose works licences have been legally annulled after being contested in court by the regional administration.

Mario Blancke says this is the second meeting held by SOHA members with the new urban planning board after the new president of the Junta de Andalucía, Susana Díaz, took office. On 20th May at La Viñuela, the group held a first meeting with the general secretary of the planning directorate, María Nieves Masegosa, at which the Junta expressed its wish to try to resolve as many situations as possible, but always within the framework of the present law.

Both parties have agreed to meet again to continue analysing the situation and to look for a solution which will mean that the system of making the houses legal can make progress. According to SOHA, the association is to participate together with Abusos Urbanístico Almanzora No of Almeria (AUAN) in drawing up a popular legislative initiative which will be presented to the Andalusian parliament, asking for a modification to the ‘Ley de Ordenación Urbanística’ law of Andalucía.