A project designed by two Spanish architects has won a UN competition to create sustainable solutions for mass urban housing. Recooperation, presented by María García and Gonzalo Navarrete of architectural firm Improvistos is a project to revitalize the run-down Orba neighbourhood in Alfafar, in the southern outskirts of Valencia (Spain), which was built in the 1960s to house the families of workers employed in a nearby timber plant that has since closed, prompting an exodus from the area. 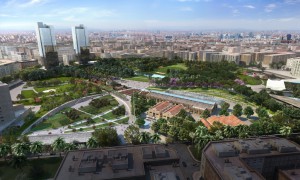 Orba’s housing stock is made up of just two types of low-quality, identical 70- and 90-square-meter apartments in blocks laid out on a grid system, originally designed to house around 6,000 people.

Improvisto’s project is based on the principle of cohousing, an approach that is popular in Scandinavia, where communities consist of private homes with shared facilities, and where residents play an active role in how the community is designed and managed.

“A neighborhood community can have different degrees of privacy and take advantage of under-utilized areas for shared services, or by generating economic activities that finance projects within the community,” says García. The plan proposes using unoccupied properties for common use, such as laundries or study areas. At the same time spare rooms in larger properties occupied by a single resident could be used whereby the community gains space and the occupant saves on costs.

García and Navarrete say their idea is for space to be utilized according to the community’s needs, with extensions, annexing of adjoining apartments, or the reduction of the size of properties carried out as required. The concept is also known as progressive architecture, whereby instead of buying a property of a fixed size, residents can add or remove rooms according to their needs and resources. In the case of Orba, this approach has been applied to the apartment blocks, where Improvistos says changes can “be implemented that would considerably increase diversity at low cost and without affecting load-bearing walls.”

Improvisto’s project also proposes the use of renewable energy sources such as solar power and biomass, as well as restructuring the allotments that some neighbors have already created, using recycled water for irrigation. They also highlight the need to recover some key buildings in the area, such as the high school, which is no longer in use, as well as a shopping center and market, which at one time was the cornerstone of the community, but is now virtually in ruins. The architects say that they also plan to develop a nearby tree nursery in the hope of creating jobs in an area that has been hard hit by unemployment.

The rules of the UN-Habitat Revitalization of Mass Housing International Competition require participants to take into account several considerations: projects must improve urban public spaces and provide mobility for residents; they must include economic revitalization by introducing new activities that generate jobs; they must have a strong social component, addressing the needs of residents in terms of child care, while providing a safe environment; they must be sustainable, preferably with an agricultural component; and bring residents, local administration, education, and business together to find long-term joint solutions.