Sierra Blanca Estates proposes to build The World Marbella on land where it had planned one of the skyscrapers that were rejected at the beginning of this year. 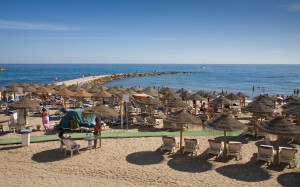 The five continents will no longer be represented in Marbella solely by the residents who hail from all over the world. Europe, America, Asia, Africa and Oceania, will give their names to the five sections of a new real estate development, a ‘microworld’ that will boast innovative design, top-of-the-range materials and as many services as residents could ask for.

The World Marbella is the name of Sierra Blanca Estates’ new project to be built on the site just metres from the Golden Mile where they had envisaged building one of the infamous skyscrapers that ended up being rejected by residents and council at the beginning of this year.

The scheme is attractive on paper and a select group of real estate firms are already showing it to potential clients - but only those who might be able to afford the between 1.3 and 3.4 million euros that these exclusive apartments are going on sale for.

The five six-storey buildings will contain no more than 112 apartments between them on a development that will include 32,600 square metres of private grounds in the Sierra Blanca area.

There will be four types of apartment, ranging from 323 to 742 square metres each. The penthouses are the most expensive, at up to 3.4 million euros.
The design, the use of new materials and the latest technology are the key pillars supporting this new project.

The bureaucratic phase of the scheme is quite advanced and pending final approval for the urbanisation and re-parcelling projects. Then the construction plans will be sent to the town planning department.

One of the main aims of The World Marbella is for the construction to blend into its environment and for the environment to have a presence inside each of the apartments. This will partly be achieved with high ceilings and large windows.

Three swimming pools, gardens, children’s play areas, sports facilities, mini golf and a cycling and running track are all planned for the communal grounds while the wealthy residents will also benefit from 24 hour security and even a social club. It is expected that the vast majority of buyers will be from other countries.

Scandinavian, British, Dutch, Belgian, German and Arab investors are the potential clients that the developers are seeking to live in this “new world” planned for Marbella.