The number of investors viewing Spain as the most attractive market for commercial real estate purchases has increased dramatically as investor interest grows for European recovery markets. 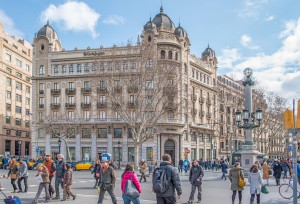 Investor confidence for Western Europe grew compared to last year, with 71 percent of investors choosing the market as the most attractive global region for investment, according to CBRE's European Real Estate Investor Intentions survey.

Of those surveyed, 19 percent viewed Spain as the most attractive for investments in 2014, up from 6 percent in 2013. The city of Madrid is second only to the popular London market, changing dramatically from last year. Barcelona also made the investors' top ten list.

The markets of Amsterdam and Dublin also ranked in the top 10, underscoring investor interest for recovering markets.

The U.K. remained the single most attractive country for investments, chosen by 29 percent of investors.

For investments this year, 65 percent of investors identified the most attractive types of assets outside the prime/core markets, higher than the 58 percent from last year.

Investors named the availability of stock as the number one obstacle for purchases, followed by asset pricing and competition from other investors. Only seven percent identified the ability to source debt as a potential deterrent, a significant change from the past two years.