The offer, from a group involving Credit Suisse, is set to be over 200 million euros and is linked to the possible extension of the site. 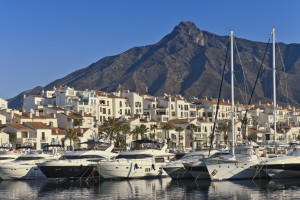 Both sides are acting in absolute secrecy, but the negotiations are happening. A group involving a Chinese investment fund, the holding company Credit Suisse and the Spanish construction company Fomento de Construcciones y Contratas (FCC) have presented an offer for the licence for Puerto Banús, which has been in the hands of a private company since construction of the site finished.

The offer was made recently and the deal could be concluded before the end of the year, according to sources consulted by SUR. Although they have no involvement in the negotiations, the Public Agency for Ports in Andalucía (APPA) as well as Marbella town council have been informed about the existence of the offer and the development of talks. Representatives from the group of investors have held at least one meeting in Marbella with the APPA.

According to SUR sources, the group that has made the offer is particularly interested in implementing an extension to the site, with the construction of a new wing in the eastern area of the marina that would also involve a substantial expansion of the port’s shopping area, one of the most highly-valued in Spain.

Whether the transaction is viable is linked to two factors: the possibility of expanding the port, and the duration of the licence. The licence that Puerto Banús SA has had since 1968 allows it to use the port until 3 March 2067, although it is thought in the APPA that, with the application of the new Coastline Law, the licence’s expiry date could be brought forward in time. This is because it depends how the central government interprets the rule.

With 870 berths, Puerto Banús is considered one of the most important marinas in the Mediterranean and ranks as one of the most expensive on the continent, alongside Marina Grande (Capri), Porto Cervo (Sardinia) and Marina di Portofino (Amalfi Coast), all in Italy, and Ibiza Magna.

One of its main advantages over other ports is that it has berths for boats over 50 metres long, making it a mooring point for high-end yachts.

Many of the most luxurious recreational boats in the world have arrived in the last few years and fed the myth of Banús in the world of high-end tourism. The current king of Saudi Arabia, Salman, has one of his boats permanently in Banús.

As well as the entry for mooring, the port’s licence holder also receives a fee for food establishments and businesses occupying the street.

It is estimated that the site receives about five million visitors each year.