The ultimate expression of luxury in Malaga province is showcased on the Muelle de Ribera in Puerto Banús. Decades ago, this became the epicentre of the most exclusive 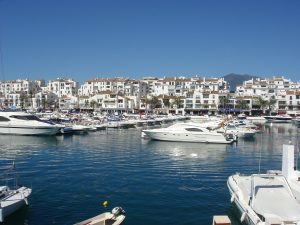 boutiques and now this street which runs alongside the Mediterranean and is lined by designer fashion stores, is the sixth most expensive shopping street in Spain.

Purchasing in these shops is something only the wealthy can do, and the same goes for setting up a business opposite the yachts: the price per square metre to rent a shop in this prestigious street is 2,280 euros.

This information is included in an annual report on the fashion business which is produced by the Asociación Empresarial del Comercio Textil y Complementos (Acotex), and it shows that rental prices slightly increased last year, from 2,160 euros in 2014.

Despite this, rents in some places are even higher. According to the Acotex ranking, Calle Preciados in Madrid and Portal del Ángel in Barcelona are the shopping streets with the highest rental values, with an average of 3,180 euros per square metre.

After those come two other streets in Madrid, Calle Serrano on the ‘golden mile’ of the Spanish capital with a rental price of 3,120 euros per square metre, and Gran Vía, which in recent years has become famous for its fashion shops. The Paseo de Gracia in Barcelona comes next on the list, followed by Puerto Banús.

These prices are unthinkable for most firms, but even so they are considerably lower than in other major cities in Europe. For example, the Via Montenapoleone in Milan is the most expensive of all, at 11,500 euros a square metre, higher even than the Parisian avenues of the Champs Elysees and Montaigne, where prices are on average 11,000 and 10,400 euros per square metre respectively.Via Condotti in Rome (9,810) and Oxford Street in London (7,250) complete the ‘top five’ most expensive streets in Europe.

To find the first reference to Spain, one has to scroll down the list to 18th place, which is held by Madrid’s Calle Preciados and Portal del Ángel in Barcelona.