Just a day after Economy Minister Luis de Guindos said that the housing market was beginning to touch bottom in a recovery that is gathering pace, the National Statistics Institute (INE) on Tuesday announced that home sales plunged in November of last year to their second-lowest level since the crisis began around the start of 2008. 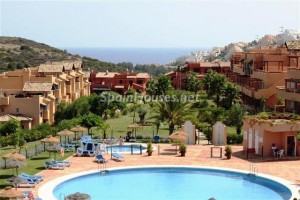 The INE said housing transactions in the month shrank by 15.7 percent to 21,847, a figure only above that of April 2012, which coincided with that year’s Easter holidays and therefore had fewer working days.

Despite an accumulated fall in prices since the highs set in 2007 of around 40 percent after a decade-long boom that suddenly burst, house sales have fallen for the last seven straight months. In the first 11 months of last year, home sales dropped 2.1 percent.

Demand is being restrained by a jobless rate of just under 26 percent and by falling wages as Spain strives to restore its competitiveness and export its way out of the crisis. Banks have also tightened lending conditions.

De Guindos announced Monday that quarterly GDP growth accelerated to 0.3 percent in the last quarter of 2013 from 0.1 percent in the previous three months when the economy emerged from its longest recession since the restoration of democracy.

New home sales in the month declined 22.1 percent to 9,823 units, while those of existing homes fell a more modest 10.0 percent to 12,024. Experts believe that existing home sales have been less affected because of the dominant presence in the market of the Sareb asset-management corporation set up by the government to absorb the toxic real estate assets of the nationalized banks.

Home sales fell in all of the country’s regions, with the exception of the Canary Islands, where they rose 13.5 percent from a year earlier and Navarre, which saw an increase of 9.7 percent. They also increased spectacularly in the North African exclaves of Ceuta, where they doubled, and Melilla, where they increased 59.1 percent.

1 thought on “Bad news for home sales in Spain, despite the fall in prices”