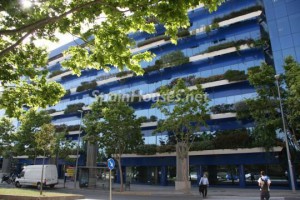 every month, meaning a small, one-bedroom flat of 50 square metres will cost €625 a month.

And after rising 11 per cent last year, Barcelona rents look to be booming.

Murcia saw the biggest drop of 4.4 per cent, and is one of the cheapest regions in which to rent, at an average of €4.70 per square metre per month.

Extremadura (€4.20) and Castilla-La Mancha (€4.40) are the only cheaper regions in Spain for tenants.

Despite the stabilisation in prices in 2014, the astronomic rents of the high point of Spain’s housing boom are a long way off. Five regional capitals have seen rent prices crash since the beginning of the crisis by more than 30 per cent; Zaragoza is the worst affected with the average rent now slashed almost in half, dropping by 44.8 per cent, followed by Castellon (down 38.8 per cent), Valencia (-35.9 per cent), Guadalajara (-33.8 per cent) and Albacete (-31.7 per cent).

Madrid and Barcelona rents by comparison have been much more stable, although still dropping a significant 17.3 per cent since their peak in 2007.