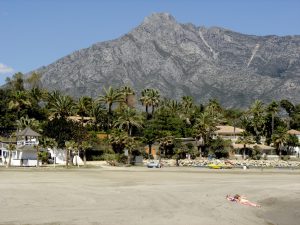 The construction of the villas will begin as soon as the council has issued the works licence – this should be done within the next few weeks, they say – and the site chosen for the exclusive development is the area known as Cascadas de Canoján, in the upper part of Sierra Blanca.

The works will be carried out by local construction companies and will take between 18 and 20 months to complete, so the properties should be ready in 2018.

This project, labelled Fontana, will not only be aimed at the top end British market but also that in Scandinavia, central Europe and Arab countries, say the developers.

What makes it unusual is that each of the five villas will be in a different architectural style, although there will be some common features. They will all be on plots of 2,000 to 3,000 square metres and will be between 1,000 and 1,500 square metres in size. They will have a swimming pool, five bedrooms, a gymnasium, wine cellar and staff accommodation. They will all have sea and mountain views.

The developers of this complex say the project will create about a dozen permanent jobs in security, maintenance, gardening and cleaning. There will be a 24-hour security service.

At the presentation, Christopher Penna said the land was purchased in 2014, although he preferred not to reveal the price. It was bought before the Supreme Court annulled the Urban Plan of 2010 and stipulated that the one which was valid was that of 1986. As this project was included in both of these documents, it is able to go ahead.

The developers believe this to be a very safe investment because of the economic growth which Spain is experiencing at present and the strength of Marbella as a destination.