The town planning debate which has raged recently over plans for a 30 storey residential block took a new turn when Mayor Ángeles Muñoz announced that they will only go ahead if there is a general consensus - which at the moment is not looking likely. 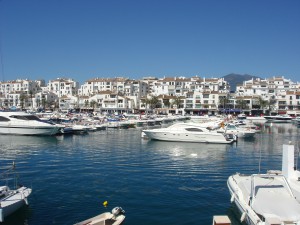 The final decision will not be taken by the council, but by a board, the ‘Consejo Social de la Ciudad’ with members drawn from local and social organisations, professional bodies and other groups. This board, which is an entity which can be set up in large towns, does not yet exist in Marbella but will be constituted in January.

The mayor emphasized that legally, it is the Town Hall’s prerogative to take the decision, but it will abide by the recommendation of the board.

The modification to the Urban Plan to allow tower blocks to be built in five areas of the municipality of Marbella, at up to 150 metres above sea level received initial approval at the last council meeting.

The fact that the change which has been approved is not considered a structural modification to the model of the town which figures in the Urban Plan that was approved in 2010, and that the modification does not affect, directly or indirectly, roads, river basins or the coastline, reduces the involvement of other administrations in the approval process and preserves the autonomy of the Town Hall at the time of making the final decision, according to various sources.

Initial approval was given at the council meeting on 27th November and the next step was to be for the planned modification to be made available for public inspection for a determined period so that claims could be made against it. Official reports about rivers, the coastline or roads would not be needed, said the council. Despite the height that these buildings could reach, sources at Marbella Town Hall insisted that no report would be needed from the Civil Aviation Authority either. Similarly, the Consultative Board of Andalucía will not need to issue a report.

Already, however, there has been considerable public criticism of the plan, and any further steps await the constitution of the board in January.

The party in opposition at the town hall, the PSOE, has said it is sceptical about the mayor’s promise not to go ahead without consensus. Putting the issue on hold until January, say opposition councillors, is just a ruse to let the outcry die down, and if the mayor is serious about consensus, the first step should be to revoke the initial approval given at the meeting last week.

The areas of Marbella where the tower blocks are planned are El Realejo, where if the project goes ahead there will be two blocks with 28 floors, the Carretera de Istán (one building with 30 storeys), Río Verde (one 30-storey block) and two different areas of Guadaiza, in each of which there will be a building with 36-storeys.

The differing heights of the buildings are determined by the height above sea level of each site, because the maximum permitted elevation for each building is not calculated from the ground on which it will stand, but from sea level. With that in mind, a maximum height of 150 metres above sea level has been established for the skyscrapers.

Agreement in favour of the tower seems a long way off, but another debate is now open. How are the town planners to respond to the needs of the town’s growing population, and what will be the effect on its traditional archicture?

A group of property developers who work in Marbella and the nearby area recently held a meeting to find out more about the modification of specific elements of the Urban Plan,which received initial approval from Marbella council recently, and to discuss the matter. The meeting, which was organised by the Association of Constructors, was held in Fuengirola and was an informal gathering which was attended by about a dozen professionals from the sector.

As this was just an informative meeting and not a formal one, no decision was adopted, although it was agreed that Marbella council should be asked for more information about the proposed modification.