The United Kingdom’s decision to leave the European Union in June has not discouraged London-based property developers from investing in Spain. Among the companies looking to establish a presence along the Mediterranean are Round Hill Capital, which has chosen the Costa del Sol as its launch pad into Spain. 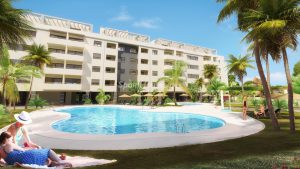 The group, set up by Michael Bickford, has opened offices in Madrid, where it is also looking to buy property, along with Barcelona and the western part of Malaga’s coastline. It has paid €30 million for a 50-hectare plot of land in Ojén, close to Marbella, from Sareb, the entity set up by the government in 2012 to absorb the toxic assets of the country’s banks. It intends to build 600 luxury apartments there. Palo Alto will be the first major property development in the area since 2008, when the country’s real estate sector crashed.

With a total investment of €250 million, Palo Alto is planned in 10 phases, with work on 75 properties to begin early in the New Year. Ojén’s local council has approved construction and other permits in less than two months.

Matías Villaroel, Round Hill Capital’s Spanish manager, says that the company had second thoughts about the project immediately after the Brexit vote, but decided to go ahead because the properties are not being targeted at British buyers.

Round Hill Capital has already sold half of the first phase of the development, mainly to Germans, Belgians, and Scandinavians. Prices for the apartments range from €440,000 to €950,000.

A few kilometers along the coast in Torremolinos, another British property developer, Intu, is going to build what it says will be the largest shopping and leisure complex in Andalusia, covering some 200,000 square meters. The company is still awaiting final approval, but says it intends to begin work early in the new year, with completion due in 36 months.

Intu, which built the Puerto Venecia shopping center in Zaragoza, says it intends to invest some €600 million in the project, with a further €500 million coming from other partners. The company adds that it expects to generate some 2,500 jobs to build the project, which will then provide work for around 4,000 people.

The most recent report commissioned by the British Chamber of Commerce into the opportunities for UK businesses in Spain concludes that neither the uncertainty over the Brexit referendum nor the absence of a Spanish government put investors off during the first six months of 2016. It notes that 64% of UK companies in Spain intend to maintain their investments here, with 8% saying they intend to increase their presence, while 28% said they intended to reduce their investment. The United Kingdom is Spain’s fifth-biggest source of foreign direct investment, making up 11% of the total.

British ambassador to Spain Simon Manley says he is “optimistic” and believes that the EU and the UK will reach agreement over Brexit that will protect trade ties.

Also in Marbella, Pacific Investment is building five upscale villas at a cost of €25 million. Each of the properties, which will sit on between 2,000 and 3,000 square meters of land, will cost around €7 million.

Estepona, in the west of Malaga province, has been keen to attract developments, granting building permits within three months. Over the course of 2016, it has approved planning permission for four property developments for some 198 apartments, along with around 20 free-standing houses. Among the main players is London-based Kronos Home, which is building 70 luxury apartments in the Arroyo Vaquero area, some eight kilometers west of Estepona. It has plans to build in other areas of the Malaga coastline.